Millets enjoy their moment in the sun as chefs, bakers and packaged food companies cash in on their health benefits and versatility and use them in innovative ways to appeal to the modern palate

Armed with an MBA from an Americ a n u n i v e r s i t y, P r a s h a n t Parameswaran was all set to carve out a high-flying corporate career in the US when he had an epiphany of sorts, which made him return to India, give up his job, and plunge headlong into researching a wondergrain that had intrigued him for a long time: ragi.

After meeting food researchers and scientists from around the country , Parameswaran decided to start his own packaged foods business, the bulk of which would be focused towards putting ragi, a hardy millet which is the staple food of rural Karnataka, on every urban breakfast table. Today , his company Kottaram Agro Foods has put ragi flakes, including flavoured variations like vanilla and chocolate, as well as ragi dosa and idli mixes, on supermarket shelves under the brand name Soulfull.“Around seven years ago, when I was working in the US grocery retail industry , I saw the growth of quinoa, the popular South American grain. 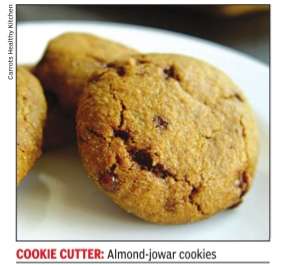 The West was going gaga over the health benefits of ancient grains, including millets. In India, too, we have many indigenous millet varieties, and the irony of the situation made me think of working with ragi,”says Parameswaran, who feels that its high fibre and calcium content (10 times that of wheat), high levels of amino acids and low fat content make the case for ragi’s importance, but it is up to companies like his to “take the story forward.”

`Millets’ is an umbrella term for grains such as ragi (also known as finger millet, nachni and bhakri), jowar (sorghum), bajra (pearl millet), foxtail (navane), and kodo (kodri). Most of these grains are very hardy , can thrive in marginal, lownutrient soil, need very little water to grow, and have high yields. Given the modern appetite for everything gluten-free, millets ought to be a natural choice for those with gluten intolerance. However, in most Indian states where they once formed a major part of the diet, more “modern“ cereals such as wheat and rice have taken over.

However, packaged food brands such as Soulfull, Pristine Organics, Manna, Kwality and 24 Mantra Organic are bringing back the culture of consuming millets like ragi in the form of porridge, dosas, idlis or as a substitute for corn flakes, wheat flakes or muesli. Ragi has also become very popular as an infant food, with companies such as Pristine Organics using it as a base for premixed and flavoured cereals for babies switching to solid food.

A lot of food innovation goes into giving millets a modern makeover.

“We realised that ragi needed to be made exciting. It meant retaining the nutrients and fibre of ragi and enriching it with flavours and consistency . We made ragi flakes thin to provide extra crunch, and our flavoured ragi breakfast cereals contain a concentrated drop of chocolate or vanilla or strawberry. We also added Bengal gram to the product to add protein. Who would have ever taught daal could be used in a breakfast cereal? That’s Indianisation and innovation,“ says Parameswaran.

For food writer and doctorturned-nutrition expert Nandita Iyer, working with millets such as foxtail and kodo has been a satisfying experiment. “Foxtail millet can be cooked in many ways. I cook it dry in salads, upma, poha and pulao, and to a mushy consistency for pat ties as a filler. I also use it as a rice substitute that can be eaten with curd or rasam/sambhar,“ says Iyer, who has posted several recipes using foxtail on her popular food blog, saffrontrail.blogspot.in.

“Foxtail is naturally gluten free, so those who cannot eat wheat and wheat-based products and don’t want to eat rice for all their meals find it a very nutritious alternative,“ says Iyer, adding that it contains twice the iron of wholewheat and is very rich in magnesium, which is known to reduce migraine attacks, asthma and check blood pressure.

“I will go ahead and say it is the best alternative to quinoa available in India… it is locally grown and won’t cost you an arm and a leg to buy . Plus, you won’t be contributing to the food miles it takes to import grains like quinoa from the other end of the world,“ says Iyer.

Varieties of millets are also readily available in the market. “We stock many types of millets in a raw form and as flours, and the popularity of ragi, foxtail and bajra is only going up. We have also tried putting out bajra biscuits and snacks such as puffed bajra, and they have done very well,“ says Swasti Aggarwal, regional head of Foodhall, a premium chain food store.

For the vegan restaurant and bakery Carrots ­ The Healthy Kitchen, millets form a prominent part of the menu, especially its bakery section, which makes baked goodies such as muffins with bajra and flavoured with coconut, and variations on this like carrot-jowar, almondbajra, jowar-cashew and ragi-coconut. It also serves cakes and cookies made with jowar and bajra flour instead of wheat-flour, often sweetened with jaggery.

“Foxtail can be substituted for rice or cereals like couscous, and we have used it to make paella, pilafs and salads,“ says Susmitha Subbaraju, the creative head at Carrots.

“Along with traditional recipes such as millet khichdi, we keep experimenting with them. We made a Lebanese-style taboluleh salad, where we replaced broken wheat with foxtail, and for a special dinner, we created a millet pilaf served with orange-infused roasted beets with a creamy sauce,“ says Susmitha.

According to her, using ragi in baking is challenging, as it has a strong flavour and texture, but jowar and bajra flours can easily be adapted into recipes that call for wheat flour. “In fact, most people who try our cookies don’t even realize that they are made of millet flour,“ says Susmitha.

For Birthday Cakes, please order at least 2 days in advance